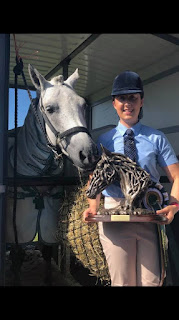 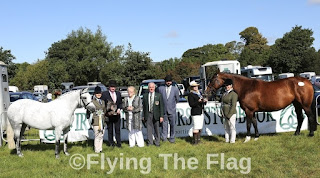 Third year BSc Equine Science student, Róisín Mc Grath, has won the All Ireland Young Handler Final at the National Ploughing Championships in Carlow.  Róisín qualified at Adamstown Show in July, one of five qualifiers.  Fifteen competitors in her age category, senior 18 to 30 years old, qualified for the event with ten heading to Fenagh to participate in the final.

There is a total prize pool of €25000 for the Championship series with Róisín claiming €1700, a trophy, plus a week’s training in a top yard.  Róisín came third in last year’s final winning €1000 which she immediately reinvested, buying a young Connemara to produce with the intent to sell.  This year, Róisín aimed to improve her game choosing a Connemara she bought for her mother ‘Mahanagh Heather’ as her partner.

With a pre prepared marketingvideo, a well polished routine using the triangle, impeccable turnout, a sales pitch and correctly answering some on the spot theory questions, they took the spoils.

The Young Handlers Championship series is in its second year.
This initiative is sponsored by Horse Sport Ireland with a view to encourage more young people into a long term involvement with the sport horse breeding industry.
Posted by IZ at 1:10 PM No comments: