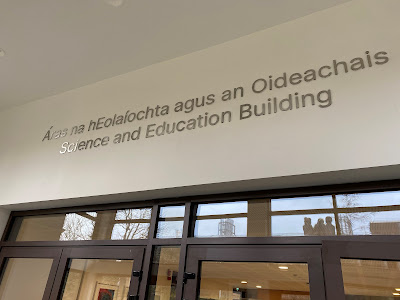 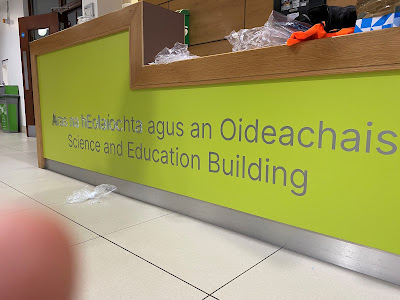 Following the revelations on Prof Schrodinger's past in Ireland as below (Irish Times, 11.12.2021, the article is behind a paywall but you can read it below), our building in UL has been renamed from "Schrodinger" to "Science and Education".

Thank you to all the people involved for their support on this renaming.

How Erwin Schrödinger indulged his ‘Lolita complex’ in Ireland

Nobel Prize-winning physicist, who spent 17 years in Ireland, was a serial groomer of girls

Several years ago Bernard Biggar was doing family tree research online when he came across a reference to his mother which stopped him in his tracks.

He knew his grand-uncle, the mathematician Msgr Pádraig de Brún, had been a friend of Erwin Schrödinger – the Nobel Prize-winning physicist who became an Irish citizen in 1948 during a 17-year stay here. Walter Moore’s biography of Schrödinger detailed how the Irish priest and the Austrian scientist became good friends but one passage about a holiday get-together at Msgr de Brún’s home on the Dingle Peninsula left Biggar shocked:

“The three children of Paddy’s sister Margaret were there at the time, Maire (18), ... Seamus (16) and Barbara (12) ... Despite her dirty nails, Barbara was a beautiful child and Erwin became infatuated with her. She was the third instance of his ‘Lolita complex’, taking her place along with ‘Weibi’ Rella and ‘Ithi’ Junger.

“The situation became so incongruous that someone, probably Paddy Browne [Msgr de Brún], had a serious word with him, and muttering dark imprecations, Erwin desisted from further attentions to Barbara, although he listed her among the unrequited loves of his life.”

Schrödinger was 53-years-old when he made advances on the pre-teenager.

Biggar contacted The Irish Times to highlight the episode after I wrote an article in September about a new cycle trail to honour Schrödinger’s link to the Dublin Institute for Advanced Studies (Dias). The article made no reference to Schrödinger’s record as a sexual predator but, on reflection, it’s clear that it should have.

The evidence is hiding in plain sight: Schrödinger was a serial abuser whose behaviour fitted the profile of a paedophile in the widely understood sense of that term.

In the case of Junger, she was 14 when the 39-year-old Schrödinger took advantage of his role as her tutor to sexually abuse her. “As well as the maths, the lessons included ‘a fair amount of petting and cuddling’ and Schrödinger soon convinced himself that he was in love with Ithi,” John Gribbin wrote in his 2012 biography of the physicist.

Over Christmas 1927, Schrödinger “set out on a long campaign of what would now be described as grooming”. He continued to pursue the student, who he called “Ithy-bitty” and at 17 she became pregnant. She had a disastrous abortion that left her sterile, by which stage Schrödinger had abandoned her for his next conquest.

Since Biggar came across the reference to his mother, he has examined the age difference in Schrödinger’s numerous “relationships”. Rella, the first girl to whom Schrödinger proclaimed love, was several years his junior in high school. His next obsession, Felicie Krauss, was 15 when Schrödinger was 24. Annemarie Bertel was 16 when Schrödinger was 25, and so it continued, the gap in years widening over time.

“I hope [this] gives you some background as to why it disturbs my siblings and I considerably when Schrödinger’s sexual depravity is conveniently overlooked,” Biggar says.

What makes Schrödinger’s behaviour additionally troubling is how he sought to justify it intellectually. He kept a record of his conquests in personal diaries, called Ephemeridae, and explained his predilection for teenage girls on the grounds that their innocence was the ideal match for his natural genius. He wrote: “Comparable in some way to the end of the spectrum, which in its deepest violet shows a tendency towards purple and red, it seems to be the usual thing that men of strong, genuine intellectuality are immensely attracted only by women who, forming the very beginning of the intellectual series, are as nearly connected to the preferred springs of nature as they themselves. Nothing intermediate will do, since no woman will ever approach nearer to genius by intellectual education than some unintellectuals do by birth so to speak.”

As Moore pointed out, Schrödinger was not only remarkably egotistical but his attitude to the opposite sex “was essentially that of a male supremacist”.

A number of women were attracted to Schrödinger and he had consensual affairs outside of his marriage. For years, he lived openly with both his wife Bertel and mistress Hildegunde March, with whom he had a child. In at least one other case, however, consent – by our current understanding – was absent.

While in Dublin, he fathered two children by two different women. One was Sheila May, an actress and activist; the other is known to us as Kate Nolan. It is not her real name as her family have always wanted to preserve their privacy.

She was 26 when the 57-year-old Schrödinger set eyes on her while she was working as a Red Cross volunteer in the Irish capital.

“It took Erwin some time to break down her resistance,” Gribbin writes. “He did so in the summer of 1945, and when the inevitable happened Kate confessed to Lena Lean, the Schrödingers’ resident childminder, that she was not quite sure how she had become pregnant. Of all Schrödinger’s ‘conquests’, this is the hardest to justify on the grounds of ‘true love’.”

Reassessing historical figures is tricky territory. How do you weigh Schrödinger’s sexual crimes against his unique contribution to science? At Trinity College Dublin, the physicist famously delivered his What Is Life? public lectures, which helped to pave the way for a golden era in molecular biology, and had a major influence on James Watson and Francis Crick’s discovery of DNA’s double helical structure in 1953.

Schrödinger, by all accounts, could be charming, entertaining and kind. He was aware of the charisma he had and used it to good effect in scientific collaborations. He loved Ireland, having been wooed here by Éamon de Valera to help found Dias in 1940. Despite Ireland’s Catholic conservatism, and the deprivations of the Emergency, he felt entirely free living here.

This presents scientific institutions today with a dilemma of how to remember, commemorate or honour Schrödinger. The issue is not whether to “cancel” him but whether we can more accurately categorise his dark side. To call it “womanising” is misleading. To call it “eroticism” is to parrot the explanation he gave, and we must be conscious of the fact that there are many people who have no voice in the historical record.

Barbara MacEntee died in 1995 and it was only later that her family discovered how Schrödinger had pursued her. “As you can imagine the subject was never discussed with my mother,” her son says.

The Irish Times asked Dias why the Schrödinger cycling map of Dublin made no reference to the physicist’s sexual affairs in the city, particularly his involvement with May and Nolan.

“Schrödinger’s Cycling Map of Dublin offers ‘a glimpse into Schrödinger’s life in Dublin’,” the institute replied. “It focuses on his public life as a scientist, and his role as the first director of the school of theoretical physics at Dias. The cycling route is intended to be enjoyed by people of all ages. It is not intended as a detailed biography.”

Asked whether it was appropriate to be commemorating Schrödinger, given what we know about his record as a sexual predator, Dias said: “Erwin Schrödinger was one of the most high-profile scientists ever to live and work in Ireland. Unfortunately, today, his scientific legacy is significantly flawed due to allegations about his private life. Dias deeply condemns any inappropriate sexual behaviour on the part of Prof Schrödinger or any other persons, past or present.

“In recent years, society as a whole has begun to re-evaluate the legacies of certain individuals and organisations where information has come to light about past misconduct. Dias and the wider scientific community are going through this process.

“Across all sectors of society, it is important to strike a balance between acknowledging the achievements of historical figures and publicly recognising – where appropriate – instances of misconduct on their part.”

* An amendment was made to this article on 13/02/22 to correct the spelling of the name Felicie Krauss. 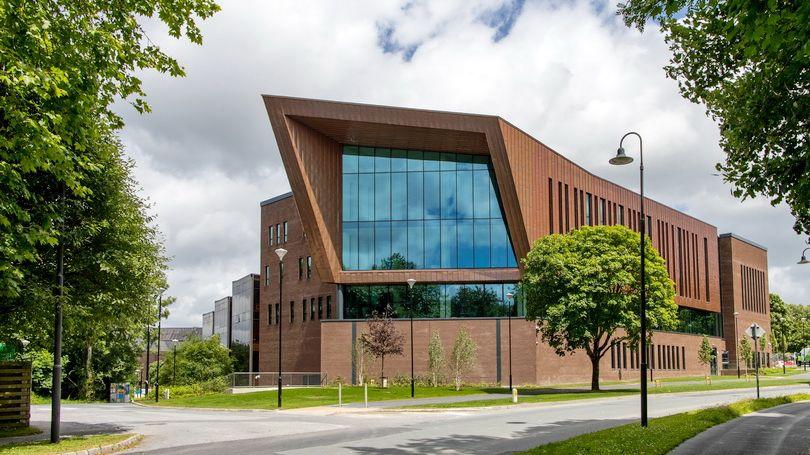 Our Glucksman Library in the University of Limerick (UL)

We are delighted to announce that from September 2022, we can offer a new MSc.

The new Master of Science in Functional Foods and Product Development Programme is in-line with the UL strategic plan by supporting and sharing expertise and knowledge through education, research, and engagement for the benefit of the graduates and the enrichment of society.

The programme is innovative, up-to-date and is paved with research excellence in food science, which is a novel and top-notch approach in UL and in Ireland.

The Postgraduate Diploma/M.Sc in Functional Foods & Product Development offered at the University of Limerick (UL) is delivered either over 1 year (full time) or 2 years (part-time).

This innovative evidence-based interdisciplinary programme explores the theoretical and practical science and technologies behind the development and validation of functional foods, ranging from conceptualization of food development to human interventions to assess the food efficacy.

The course program offers a wide variety of Modules that will aid the student to design in vitro (i.e., chemical and cell-based protocols) and in vivo (i.e. yeasts, animals, and human interventions) protocols.

Additionally, the student will be able to analyse data and make inferences about the effectiveness/functionality of the ingredient and/or food models developed.